/ Canada / What it is like to attend the Grey Cup? 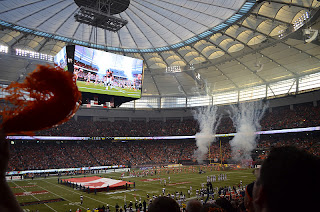 Here in Canada, the Grey Cup is kind of the equivalent to the Superbowl but without the je ne sais quois that the Superbowl or Stanley Cup possess. However, it was a lot of fun to go to and this year it was held in Vancouver, BC.

The first day we spent the majority of our time at the Molson events hosted at the new(er) Vancouver Convention Centre. Needless to say there was a ton of beer ($7 each!) and lots of fun bands such as Barney Bentall, a Beatles tribute band, and Colin James.

This visit I tried a new restaurant called The Cascade Room where me and some girlfriends, that I met while in Italy, caught up over drinks and appetizers. The food was delicious and the atmosphere was great for a girls night out or a first date. It was very busy as expected during Grey Cup weekend let alone a Saturday night. The service suffered as a result and at times we were waiting too long for a drink or at times they would be forgotten about. The manager (or I assume he was) was most astute and notice our low drinks or the lack of service and have them delivered to us soon after.

My selection of appetizer was the Yarrow Meadows Duck Trio ($16) which included hot smoked duck bacon with tomato chutney, duck rillettes and crispy confit with a black currant glaze. All this was accompanied by slices of french bread. As for my company the calamari and Wild BC Smoked Salmon Terrine was their choices. The calamari was as good as any but the Salmon plate is a delicious selection for anyone who desired to sample some British Columbian Salmon. 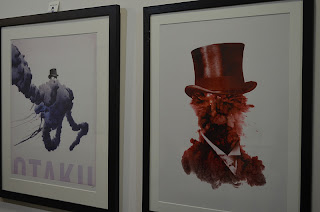 We finished our night off with a trip to an art gallery where I happily became a patron of one photographer named Olga Rybalko. There were so many talented artists at this event and you can follow the gallery on facebook (NoMass Gallery). As for the main event BC Lions won the Grey Cup! Chad Kroeger, lead singer of my least favourite band Nickleback and the half-time entertainment, has finally cut his hair so he no longer resembles the struggling Nicholas Cage from Season of the Witch (or maybe Cage resembled long-haired Kroeger?)