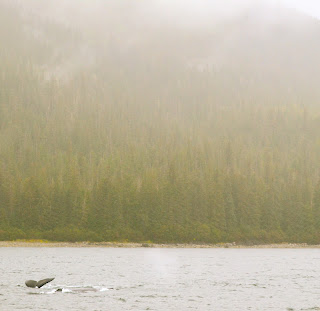 A cruise to Alaska – probably the only way most would consider visiting – seemed like a good idea at the time of booking. I figured it would be a great way to celebrate a three-year anniversary with my boyfriend while spending time with my grandparents and parents. I also felt the need to get back to nature after we returned from our trip to Las Vegas. However, after the third day it was apparent that none of us were cruise people. 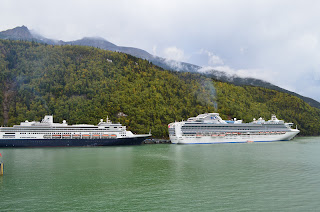 We had booked our all-inclusive cruise on the Norwegian Cruise Line that departed from Seattle. I had notified the media representative that I wrote a food and travel blog which turned out to be a great way to receive free champagne and a couple of tickets to the Captain’s Gala. The first couple of days sailing to Ketchikan, our first stop, were rough. The waves reached twenty feet in height and, needless to say, we saw very little of my grandparents at first as they acclimatized to constant swaying.
One morning, I woke up with an odd feeling pulling me to look outside. I stood on my balcony breathing in the fresh air when all of a sudden I spotted dolphins playing within the ships wake. These were the first wild dolphins I had ever witnessed in person. 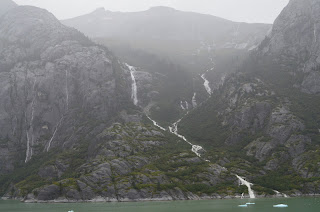 After the ship finally reached the inside passage where the waters settled down we found ourselves in the ship’s casino {voted best casino on water}. Here, we were able to get to know the charming people who made our ship function. The Black Jack dealers, Three-Card Poker pit bosses and bar tenders all made my stay on board the ship a little less nauseating. Despite my need to get back to nature, I found myself visiting the casino everyday we sailed. Although, the eight hundred dollars I won there didn’t hurt. The cruise itself was not entirely all-inclusive as I understood it. There were cover charges at each restaurant, a fee for every guest was charged to the room each day, and any alcohol was not free. My eight hundred dollars went towards the extra costs during our trip.
Ketchikan
Our arrival in Ketchikan was a relief. I was desperately excited to stand on solid ground again without needing to constantly adjust my balance. The food onboard the ship was mediocre at best and I was searching for some fresh seafood to satisfy my foodie cravings until we reached Juneau. We stumbled upon a small place called The Fish House but it was so busy we were drawn to the low key Crab Cracker next door. We ordered Alaskan crab and the fisherman’s platter which featured fried oysters, fish n’ chips with light and crispy batter, and shrimp. Everything was delicious and the crab was sweet and buttery. For only sixty-five dollars we ate fresh seafood that would have cost double or more back home. The actual town of Ketchikan was very small and picturesque. The buildings were painted bright colours, red, orange and blue, which reminded me of photos I had seen of Norway. On each street there were lovely art galleries all claiming authentic First Nations art. 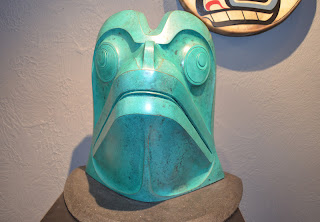 Alongside these were repetitive jewelry stores with Russian names. There were also many stores where Alaskan trinkets with Sarah Palin or a whale featured upon key chains, shot glasses or postcards could be purchased. I opted to wait and see what was in Skagway, our final Alaskan stop before continuing on to Prince Rupert.
Juneau
One of the many cons of cruising is the limited amount of time you have to see your port location. This is especially the case when you book one of the cruises pricey excursions, such as whale watching. We boarded a double decker boat that held about 100+ passengers equipped with a roof top viewing deck which was only open when the boat was fully stopped. The rain was incessant and cold, the accompanied wind didn’t help either. The crowds of people upon the deck paid top dollar to see a whale tails and their spouting of ocean water into the air. They were pushing my little self out of the way with bony shoulders and elbows. I took as many photos as I could with the camera towering above my head, my arms stretched up just so I could see the whale within my own photos if not in person for more than a few seconds. It was exciting to see the whales and sea lions in their natural habitats in such lush forested scenery.

I know very little of the actual city of Juneau itself as we drove right past it on our way to the dock of our tour. I do know that they set the now broken record of selling the most cheeseburgers when the McDonalds opened but that record was beat when McDonalds opened in China. 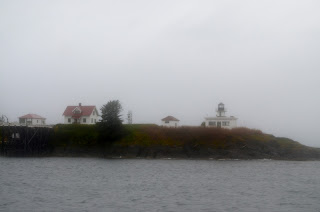 Skagway
Juneau, was cold, rainy but full of whale and seal sightings. Skagway, on the other hand, proved to be the most charming town that we visited during our trip. This town was popular during the Klondike and miners could easily find a glass of whisky and a woman to settle down with here. The sidewalks were all preserved as they once were, wooden boards echoing each step. It was the only time I wished I had owned a pair of cowboy boots laced with spurs. Skagway preserved its history well with a museum that contained a replica of a saloon fit with information on each wall with characters, gamblers, romancers, men who struck gold, women who lost at love, that had at one time called Skagway home. My favourite building of all was the modest looking Red Onion Saloon. Stepping inside, I was bombarded with banjo music, men singing about fool’s gold and women, waitresses dressed in uplifting corsets, art upon the walls of nude women and, of course, what would a bar be without hundreds of chamber pots lining the walls.

Every seat in the house was taken after we sat down. The noise of people laughing, taking pictures, striking up flirtatious banter with the waitresses and old time music was an exciting change from the slow, quiet tone of the cruise ship. After my first beer, a woman dressed with feathers and a lovely crimson corset descended the stairs that lead to a roped off dinning room. The woman, with a thunderous call, beckoned guests to follow her up stairs for a tour of the brothel with a potential prospect of seeing one of the saloon’s ghosts. I had to join her! 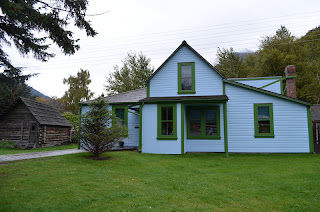 I ascended the stairs and walked through, what the madam revealed to be, a sort of waiting room with a bar that provided liquid courage to the lonely customers. The first room we then proceeded to was damp and held a glass case full of objects that were found concealed beneath the floorboards for many years. There were coins for one complimentary ‘screw’, a painted image of the Virgin Mary, books, paper fans, photos of family, objects to remind the girls of home. 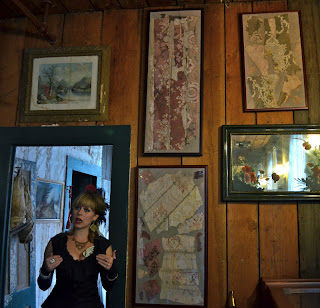 In another room there were framed scraps of decorative aged wallpaper. The madam explained, each layer of wallpaper represented one girl who lived in that particular room. In one room a total of fourteen wallpaper layers were revealed. This brothel held French furniture and a small piano that survived the dangerous White Pass leading to and from Skagway. Red Onion Saloon even received electricity before New York City. In each room there were pipes within the floor that would lead down behind the bar where the woman would drop her payment. The bar tender would hear the ringing coins drop into the box behind the bar to ensure payment was made. However, this madam who pimped the girls was a bit shifty in terms of payment. Younger men would at times pay in gold dust in which case would have to be weighed. The scale used at the Red Onion Saloon was rigged so that the men would in the end pay more. The payment that each girl received for services was five dollars, the same amount paid for the tour of the old brothel. Keep in mind that five dollars was worth a lot more in 1899, and that the madam, as well as the hired guard, would revoke a hefty sum from this as well. 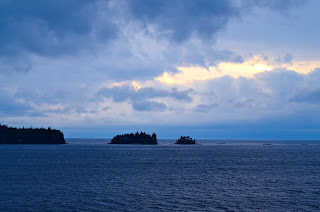 Rather than getting back to nature, it seemed that Alaska offered a history lesson, a pricy one hundred and fifty dollars worth of whale watching (per person) and great gambling to help me pay for the excess costs of cruising. Perhaps I am being a bit cynical about Alaska. Maybe I should just remember the playful dolphins carelessly swimming in the waves, the prostitutes that I learned about and the great gambling. However, if I wanted to go to Vegas again I would have went and it wouldn’t have cost twenty-one hundred dollars…