Earlier this year I was in need of some scenery, that good ol’ fashioned idea of getting back to nature…without the discomfort of camping. University had made me slightly insane and I needed a break from my laptop.

I was hoping that a cruise would be right up my alley so I went against every “traveler’s”advice and became a sort of “tourist” for a week in September. I cheated a bit and missed the third week of my two Creative Writing classes (sorry to my Professors if they read this).

The first day of the cruise began as I had imagined. I woke up to a calm ocean, dolphins playing in the waves of the boat and a glimpse of a whale’s tale just below our 10th floor balcony. It was as if I was living my dreams and truly getting back to nature. Something within was extremely satisfied to see dolphins frolicking in the wild rather than in captivity. 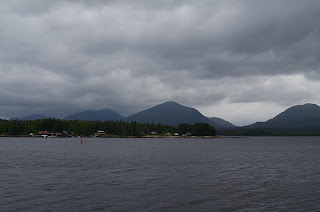 However, after a breakfast at the buffet of powdered eggs and limp bacon, something struck me. The waves became more violent and I felt queazy. My grandparents, mom and I couldn’t quite power through the sea sickness, like my dad and my boyfriend did. 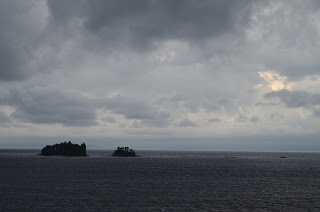 Later, after a few hours on an angry ocean, my wits were gathered and I headed down to the Gastby’s Champagne bar (which I frequented often throughout my trip). As a group we had all generally decided that the casino was the ‘happenin” place for us to spend our evening after a delicious pasta dinner at the La Cucina restaurant (cover charge $25 per person, not including alcohol).

One of my favourite things about this cruise was the crew members…well more like the dealers at the casino, who came from all over the world. One from the Ukraine, Philippines, Thailand, Barbados etc. They all made the effort to get to know you and make an impression. Aimee was my favourite dealer and it seemed whenever she was around and I had the crap dice in my hand it was impossible for me to roll a seven.
The first day of an actual shore excursion arrived. We had made it to Ketchikan and I was determined to have some good seafood for lunch. Anytime I had the chance to eat off the boat I took it. The town was cute and small. We first had stopped at a local bar/restaurant to have a beer. The waitress made us aware that the town is stricken with alcoholism and it made sense, being a small town that only booms when the cruise ships are in season. Bars and saloons outnumbered restaurants or activity oriented establishments leaving very little for the locals to take interest in.
Fishing is the primary way to provide for a family. We had arrived at the end of the season and many tourist stores were preparing to close, or already had. Some were closing for the season and others seemed to be closing for good. 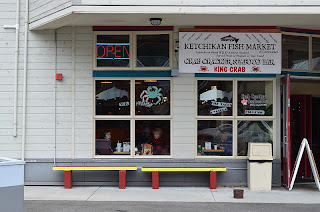 My grandparents became tired of walking the busy streets lined with tacky jewelry stores or “authentic” Indian art stores. My boyfriend and I headed to the Crab Cracker which felt like a seafood dinner more than a restaurant. It had real character and was slightly hidden next to its nemesis the Fish House. 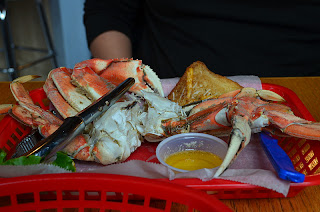 My boyfriend ordered the crab plate and I knew that a true test of a seafood restaurant would be to live or die by its fish and chips. Too many a time have I ordered this dish in so many areas of the world and the batter has always fallen short: too thick of batter, too little of fish, too oily/greasy, the fish is fishy, is this fish? 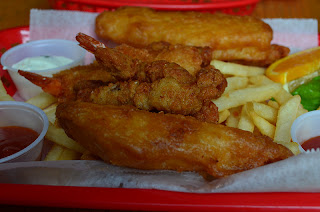 However, I must clear the air of the fishy stink right now and say that the Crab Cracker has its battered fish nailed down perfectly. It is crispy and thin which showcases the underlying fresh cod. Bravo!

As for the accompanying battered clam strips and shrimp…those too were delicious. My boyfriend could barely finish the fresh Alaskan crab. The large pieces of flaky white meat needed no butter or salt, it was rich on its own. After a hearty lunch we wandered back to the boat, sat on our balcony with a glass of champagne courtesy of the Captain (to The Wanderfull Traveler) and waved goodbye to the best battered fish ever.