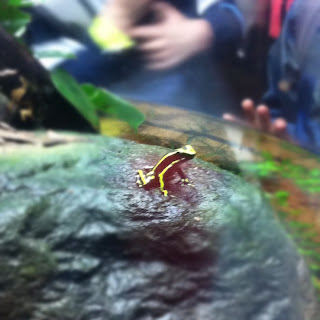 Back from my trip to Vancouver and it was filled with delicious culinary experiences all had at restaurants that I had never been before. Now only am I back from a trip but I am in the midst of graduation, packing for a move, and writing. For now I’d like to show some photos taken on my iPhone that turned out really well considering they were of animals, reptiles, amphibians etc. behind glass. You may have seen some of these images if you follow me on Instagram (@wanderfulltraveler). If not I do hope you enjoy! One attraction that makes the Vancouver Aquarium’s $21 entry fee ($16 if you’re using an expired student ID ;)) worth the trip is the Butterfly Sanctuary. I was interested in the new Penguin exhibit but like most animals kept in small areas there wasn’t much movement or interest showed by the penguins from South Africa. I can’t say I am a supported of animals being kept in small tanks when they are used to such open spaces such as the Beluga whales or the Otters but the fish tanks really don’t bother me nearly as much as the mammals. The Aquarium is located in Stanley Park which is a historical and overwhelming space itself. The rainforest trees are grand and provide a great space for photographers, hikers, nature enthusiasts and artists. The sea wall that follows the 9 km contour picturesque for joggers, rollerbladers and leisurely bike rides. “A city that has been carved out of the forest should maintain
somewhere within its boundaries evidence of what it once was, and so long
as Stanley Park remains unspoiled that testimony to the giant trees which
occupied the site of Vancouver in former days will remain”
The News Herald – October 30, 1939 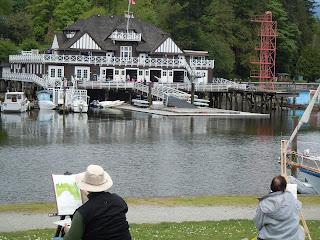