Just in time for the month of love and floating mischievous cupids the ArtSmart Roundtable is taking aim at the depiction of love in art. If you’re new to ArtSmart Roundtable you can follow us, a group of passionate travelers with a penchant for art, at our Facebook page and see what other members wrote at the bottom of this post.
As for myself I have been thinking a lot about Venice lately, not only because the famous Carnivale takes place this month but also I have been reading everything Venetian related. Tour the Rialto Fish Market in Venice and you’ll notice the passion the Venetians have for their fresh seafood caught in the Adriatic. Ask a vendor of any random seafood stall, “Is this fresh?” and he’ll probably swear at you before raising his hands in anger (I saw it happen). Venetians take immense pride in their seafood and connection to the sea but it’s not only evident in their food – ignore the tourist trap food, if you had a bad meal in Venice that was probably on you. Venetians have celebrated their connection to the Adriatic in art as well. Tour the Palazzo Ducale (Doge’s Palace) and you’ll find plenty of examples of the Empire’s homage to the sea and the lagoon.
If it wasn’t for their unique location the Venetian Empire wouldn’t have been such a powerhouse for 1000 years until its decline in the mid to late 18th century. Venice was a merchant city. A perfectly located trade partner between the East and Europe – as is evident by the old Palazzo architecture and curvaceous Persian-inspired windows as shown below. The Venetians love(d) the sea so much they had a procession where the Doge would formally marry the Adriatic. It took place on the Festa della Sensa during the month of May, an event that commemorated the ascension of Christ but also two major events in Venetian history.

The first event took place in 1000 AD and celebrated the Doge’s rescue of the Denziens of Dalmatia, a historic region of what is now Croatia. The second event pertains to the Treaty of Venice from 1177 which involved the Doge Sabastiano Zani, Pope Alexander III and the Holy Roman Emperor, Frederick I. The treaty settled the Papal oppositions of the Papacy and the Roman Empire.

In the celebration of these two important events in Venetian history a grand procession takes place with colourful theatric boats and a marriage between the Doge and the sea. Quite literally. A ring would be tossed into the Adriatic by the Doge as a priest would bless the union.

Today this celebration still takes place with the Mayor of Venice, locals, gondoliers and tourists who all partake in the populating of the lagoon with hundreds of boats, gondolas and kayaks.

Explore one of the many museums in Venice – Museo Correr, Palazzo Ducale, Academia Gallery – and you’ll be sure to find signs of Venetian pride of their location upon the Adriatic.

Some of my personal favourite art celebrating Venice and the Adriatic are by classic Venetian artists you should know before your trip to the lagoon city. I had the privilege of touring Venice with an art history professor for one week. It was my first time in Venice and her perspective gave me a secret insight to the city that many tourists miss out on. I credit her with my deep passion for Venezia as I champion the city every chance I get – it always shocks me to read about people disliking the city but then again they haven’t seen what I have.

My professor took us through the Palazzo Ducale, expertly dodging the lines and crowds, we followed her throughout the halls into rooms where very few tourists would stop and admire its hidden gems – perhaps because they didn’t know what they were looking at. Occasionally breaking the rules, my professor told us to stop and wait in a relatively empty hall. She took a quick look for any security guards then lifted a flimsy rope that sealed off a narrow hallway. She gave us the signal and we ducked in each of us taking a seat upon a staircase. As we turned towards the entrance settling into our stone seats a tall mural was revealed to us hidden just above the doorway. The hidden gem was painted by Titian with his classic red colour as the Gondolier’s cape. In actuality this work is depicting Saint Christopher largely known as the patron saint of travelers. However, the local Gondoliers adopted him as their own patron saint. Within Titian’s depiction he shows the baby Jesus upon Saint Christopher’s shoulder in a very playful pose. Within the background you can see the silhouette of Venice thereby placing the saint within the Adriatic lagoon as well as placing the city within an important historical and religious context.

When you experience Venice you experience the passion the residents have for their integral connection to the Adriatic. When you eat their seafood cicchetti or you gaze out at the gondolas in the lagoon you are participating in age old traditions that Casanova and Caneletto both participated in. When you stand and actively participate in Venetian life, rather than rush through it then on to your next destination, you become apart of history.

Keep up to date on all my ArtSmart and travel related posts by signing up for my newsletter here. 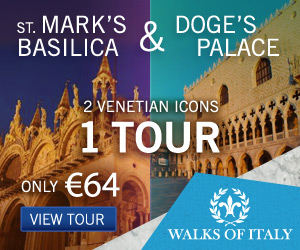 Previous Post: « The Culinary Travel Guide: Style Files
Next Post: ArtSmart: A Look at the Art Scene in Vancouver »